Mirrors live in most of our homes with us. I’ve got several, myself. And despite having given it a fair amount of thought over the years, I haven’t yet managed to make friends with the face that looks back at me every single day.

This morning as I lay in bed thinking about my challenge, I fell upon the expression: “Take a long, hard look in the mirror.”

When we say it to someone, I suppose we’re usually telling them to stop lying, denying or making excuses. We’re asking them to take responsibility for who/how/what they are. In other words, we’re saying, Get real, man!

But as I turned the words around in my head, I realized that the expression evokes something different for me.

Mirrors live in most of our homes with us. I’ve got several, myself. And despite having given the question a fair amount of thought over the years, I haven’t yet managed to make friends with the face that looks back at me every single day.

In fact, the word “hard” is truly appropriate to describe what often happens when I behold my reflection. There is hostility. It’s not pretty.

I guess this hearkens back to what I was writing yesterday: we tend to get really good at convincing ourselves that how we appear is simply not OK. From our features to our weight to the state of our skin to the color of our teeth, and don’t even get me started on the subject of hair…we inspect and critique our mortal bodies. We are too often horrified by what we see.

And even on days when we’re not horrified, we still hold back. We don’t grant our reflection a tender, loving smile as we would to another loved one we locked eyes with. Never mind tender and loving, we don’t usually even smile at all (excepting weird lip movements that might resemble a smile, when applying lipstick).

Well, I keep saying we but I haven’t done enough asking around to really know if what I’ve experienced is universal or not. I hope it’s not. But I fear it is.

I suppose there’s a related—but not much healthier—phenomenon that exists out that’s a sort of narcissistic fascination with one’s own image or reflection. Less critical, less hard, but still painfully separated from the soul that’s inhabiting the body. Am I making sense?

Something my sister Emily pointed out to me one day is that what we’re seeing in the mirror is not “us”. It’s simply one reflection, in one moment of time, from one angle, and just one facet of our multi-faceted being.

This was helpful, and as I raise my third child, I try to avoid saying stuff like “Who’s that in the mirror? It’s you! It’s Stella!” Instead, I point out that we’re looking at her reflection, or better yet, a reflection of her.

And on that note (babies) it might behoove us all to make note that babies (before they learn all the nonsense) are freakin SO HAPPY to see their own reflection. When they’re too young to “know” that it’s “them”, and even once they clearly have put 1 and 1 together, they’re so INTO making faces at, and admiring their reflection. Stella was really into kissing herself for a while. We are clearly smarter before we learn stuff.

Another thing I learned from Emily is that we can practice circumventing the usual mirror scowl/hardness by settling in for several minutes and simply locking eyes with our reflection. I recall her referring to the possibility that this practice could lead one down the proverbial “rabbit hole”, in a good way.

I have tried this a few times, once when I was stoned (back when I still smoked weed) and the other time when I was alone in a hotel bedroom during a yoga retreat I was working at. Both times I was able to (temporarily anyway) make friends with that moving image of myself.

There comes a softening, and a laughing quality, when you lock eyes with that familiar friend/enemy and you don’t let them scare you away. I guess I need to put aside a bit more time for mirror time.

If I can just practice locking eyes, and gently reminding myself: “Friend. Friend. You’re looking at a friend,” I bet I could make some progress. I’ll report back.

6 thoughts on “A Hard Look in the Mirror” 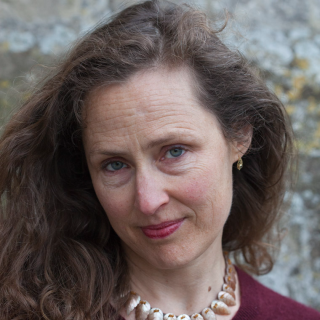 Follow Love in the First Person: Do I Love Me? on WordPress.com

Posts from my other blog: Orchard Gate

My Mailman Turned Me into a Monster

November is birthday season in our family. My first two daughters and I were all born during the month of falling leaves, dropping temperatures, sweater weather, short days of golden hues and long chilly nights. My third daughter was born 3 days after November finished, but she gets to be in the club anyway. When […]

I left my homeland. Left my family far behind. I set up here, amongst the French people. I gave birth to two French children. Mais où donc se trouve “chez moi”? So where is home, actually?

city of lights, in the fog

are some places more characterized by contrast than others? or does every spot on this planet – and every human among us, for that matter – have a wealth of idiosyncrasies?